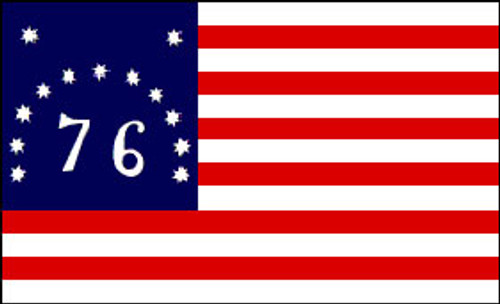 The Bennington Flag is a version of the American Flag associated with the American Revolution Battle of Bennington, from which it derives its name. The Bennington Flag features 13 stars and 13 stripes, symbolic of the 13 American Colonies that rebelled against Great Britain. The Bennington is very easy to recognize with the large numbers 76 in the field, recalling the year 1776.This flag, unlike the modern US flag, has stripes that alternate white-red from the top. Our authentic reproductions of flags from American history are popular with collectors or as part of patriotic displays. They are manufactured with the same high quality outdoor construction as our state and international flags.