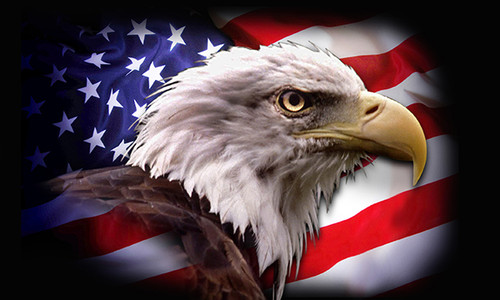 Fun, festive and colorful. This is a good description for our gorgeous selection of 3'x5' Patriotic Silk Screen nylon flags. They are equipped with two brass grommets to hang on any flag pole. Exact design is subject to change. Made in the USA.

The origin and history of the Bald Eagle in U.S. Government

The most recognizable American Eagle, the Bald Eagle is not only the national bird of the United States, it also serves as the national emblem, featured prominently on the logos of many official government seals and flags as well as on various postage stamps, coins, (including gold coins), silver and half dollars, quarters and paper currency. The legendary bird is also featured on many state flags and seals, serving as an unmistakable American symbol and epitomizing the patriotic spirit that has guided the still-youthful nation for more than two centuries. The eagle first came into prominence as a result of the founding fathers of the Continental Congress choosing it as a symbol for the fledgling nation in 1782, although it wasn't made the official emblem until 1787. The unique characteristics of the majestic bird were seen as representative of the young republic's hopes and ideals such as freedom, independence, loyalty and a boundless, indomitable spirit. Found across nearly all of North America, various Native American tribes had long recognized the majesty and beauty of the bird, utilizing it in both ceremonial and spiritual aspects, including the rewarding of eagle feathers to warriors who exhibited the bravery, loyalty and fierceness associated with the iconic bird. On the Great Seal of the U.S. the bird's supreme power and authority is perfectly captured, with a front-facing eagle, wings spread wide and displaying a shield on its chest with thirteen red and white stripes. Surrounding the shield is a blue background adorned with the same number of stars, signifying the original colonies. The eagle's left talon is clutching thirteen arrows and the right holds an olive branch, the universal symbol of peace. In the eagle's beak is an inscribed scroll with the motto, "E Pluribus Unum," (from the Latin 'Out of Many, One'), symbolizing the nation's birthright and origins. Federally protected, the bald eagle population has made a remarkable comeback over the past three-to-four decades, being downgraded from "Endangered" to "Threatened" status in the mid-1990s. The vast majority of the population resides in Alaska, with Florida and Minnesota also reporting significant increases in numbers in recent years.